On the borders of Ontario, Canada and the state of New York, lies the majestic beauty of the frozen Niagara Falls. The gushing waters appearing to be frozen in the month of January when the temperature is between 16 to 32 degrees, are actually covered by the freezing mist which covers everything in the surroundings with a sheet of ice. The strength and the magnitude of these falls will make you wonder about the tiny space we occupy as humans on the beautiful havens we inhabit.

A group of 3 falls, the Horseshoe Falls or the Canadian falls, larger than the American and the Bridal Veil Falls, forms the great Niagara Falls. They have been partially freezing in the month of January because of the cold winds flowing from the southwest casting a snowy spell of crystalline beauty.
Though the falls might seem to be frozen but they are in reality partially frozen as the mist that envelopes them starts to form a layer of ice on top of the moving water. It was in the year 1848 when the world witnessed completely frozen Niagara Falls in Canada. It was caused due to the ice jam on the Niagara River, putting a halt to the flow of water. The other instances of an icy fate for our beloved falls have been in 1906, 1911, 2014, 2017 and 2019.Also, if you ever noticed, the reason behind a more frozen appearance of the American Falls than the Horseshoe Falls is because of the less water flow that goes to it from the Niagara River and the majority going to the Horseshoe Falls, providing a greater chance for the ice to settle on the stagnant surface.

The already adorned Frozen Niagara falls in Canada is white and pure in the winter months. It has been a sight for sore eyes of the tourists amused by the jittering cold. Though the same beauty has claimed 3 lives when the ice bridge on top of the river broke apart, which has consequently been banned now, while the lower part of the river gushed at its normal pace. 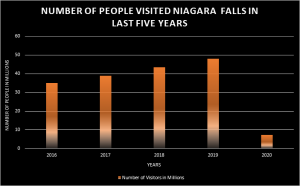 If the pristine beauty of the white land does not fascinate you, the colors caught in the heavenly skies from the rainbows will surely make you skip a breath. Next Story
A Second Eden: Lake Mývatn in Iceland