Planning a trip from Leh to Pangong Lake? Here’s all what you need to know!

Located in Changthang region of Ladakh, Pangong Tso lake is indeed one of the most beautiful places in India. Featured in the Bollywood blockbuster “3 idiots”, the place become a common tourist spot for travelers from across the country. At a height of 17,590 ft, the gateway to the Changthang is the third highest motor-able pass. 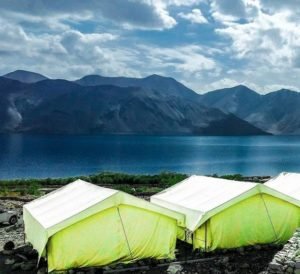 Pangong Tso Lake is situated at an altitude of about 4300 m. It happens to be the largest brackish lake in Asia, with a major part of it extending to Tibet. With a length of 130 m and width of 5 km, a major proportion of the lake covers the other side of the Indo-China border. More than 50% of the lake is said to be in China and the remaining is in India.

The name ‘Pangong Tso’ is said to be derived from Tibetan phrase “spang gong mtsho” which stands for “High grassland Lake”. It is also known as the ‘enchanted lake’. The lake has a number of minerals in its basin which have been formed due to melting of snow. 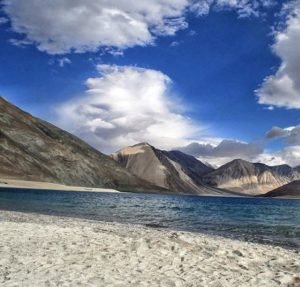 Changing and reflecting the colours like blue, green, purple, and violet, Pangong Tso Lake is indeed a marvel gracing Ladakh. Though Pangong Tso Lake has salty water, it is completely frozen during winters. Hence, there is no marine life there, except a few migrating birds. The lake also serves as a breeding ground for a variety of birds. It has no fish or any other aquatic life, but you can see a number of ducks and gulls flying over and on the surface of the lake. Bar Headed Goose and Brahmini Ducks are most commonly seen here in the summer season.

Spangmik happens to be the maximum point where tourists are allowed to go. On the way to Spangmik, you’ll find picturesque views of the mountains of the Changchenmo range to the north.

Pangong Tso Lake is located around 175 kms from Leh town across the Chang la pass. You can easily get from Leh to Pangong Lake via road.

Route between Leh to Pangong lake: Leh – Karu (45 kms) – Chang La (35 kms) – Tangtse (40 kms) – Spangmik (40 kms) – Pangong Tso. It is important to note that as there are no petrol pumps on this route, thus you are required to carry extra petrol for the return journey. Travel enthusiasts can also take the route of Delhi-Manali-Jispa-Darcha-Sarchu-Leh-Khardungla-Pangong, for sightseeing.

You’ll find a number of beautiful places enroute Leh to Pangong Lake. You can visit Darbuk Village which has the memorials of the warriors who lost their lives during the Indo-China war of 1962. You’ll also find huge herds of Pashmina sheep and long-tailed yaks.

Tangstey, which is around an hour away from Pangong Tso is a good option for night stays. You can also consider the options like Spangmik and Lukung which are relatively closer to Pangong Tso.

Nested peacefully on the northern-most tip of the Changthang Plateau in Chang-Chemno Range, the Marsimik La pass is yet another common tourist attraction near Pangong Lake. It is at a distance of 45 kms and 35 kms from Spangmik and Pangong Tso respectively. One Response to :
Planning a trip from Leh to Pangong Lake? Here’s all what you need to know!