Celebrating its 50th anniversary this year, the Longewala war memorial is bound to fill you up with tears and pride for the Indian martyrs of the 1971 Indo-Pak war. Located 124 km away (almost 2 hours) from Jaisalmer Fort, the memorial preserves war remains and narrates a story that signifies national pride.

As you enter the Longewala war memorial, behold the sight of gigantic T59 and Sherman tanks captured by the army during the war. You can find other similar models around the memorial. Inside the museum built at the center of the memorial, you can find topographic models of the warzone, battalion uniforms, and heart-wrenching stories written under the names of various soldiers. The museum walls reveal the story of the 1971 war with hundreds of framed photographs. Captured moments of destroyed jeeps, soldiers defending their post in combat, and battalions celebrating victory showcase the valor of the Indian army’s brave hearts throughout the struggle. There is a separate list of all the soldiers bestowed with Vir Chakra and Sena Medal on one of the walls. After the museum, you can go through the bunkers and click some pictures. It will take approximately 2 hours to ensure a successful visit to the memorial. 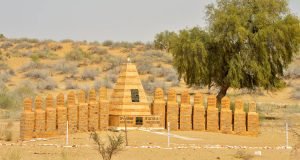 As you enter the audio-visual theater at the heart of the Longewala war memorial, a 15-minute war film is showcased (Rs 25 chargeable) that narrates the tale of the 1971 Indo-Pak war featuring the battle stories of Kumaon Regiment, historic leadership of Major (Retd) Kuldeep Singh Chandpuri, and other heroes. Providing a holistic insight into the incident, it lends a perspective of patriotism as you witness other elements of the memorial. Your trip to Jaisalmer is useless if you don’t go to the legendary Longewala war memorial. The reminisced Indo-Pak war of 1971 was scrapped where the latter faced a brutal defeat. Only once, for the interest of our fallen heroes and also to your pride of India you simply just hold, do see Longewala War Memorial. The exact length to pay out of Jaisalmer Fort into Longewala is 124 km (77 miles) via Ramgarh road. It’s a simple driveway to the world streets without any bulge. Windmills, stains of the desert, and sand plants create the ride quite intriguing. The landmarks also provide a fantastic photo opportunity along with the manner.

Longewala warfare ministry isn’t simply a destination. It’s an emotion which each joyful Indian holds within. India not merely appeared successful from the 1971 conflict with Pakistan but also countless incredible stories of sacrifice and courage which were inscribed in golden.

Longewala War Memorial shows the warfare zone, components used, uniforms of troops. The walls have pictures and names of their martyrs in addition to the ones that fought to guard the nation. One of these is overdue Brigadier (then Major) Kuldeep Singh Chandpuri. He even gave a hard fight to the 2,000 strong Pakistani troops using a group of just 120 Indian troops, protecting the Longewala place for the entire night.

Under his able direction, Indian troops proceeded bunker to bunker and incited heavy casualty, forcing the Allied troops to escape. Because of his outstanding direction, Major Chandpuri had been given the Mahavir Chakra at the Government of India. His personality has been depicted by Sunny Deol from the 1997 film border’.

This can be an intriguing story of this conflict of BP638. 1 3 Kumaon regiment and 6 separate Armored brigades were ordered to chase the withdrawing enemy and then forced sailed them 17 km in the Pak land. This helped clean the BP638 that was seized by the Pakistan army. Following the thundering cries of’Da Da Krishan ki Jai’, the Kumaon regiment had established a history of valor that’s the lesser-known prior date.

40 INR for example the warfare film series. Free for kids below a decade old.

Maybe not far from the Longewala war ministry is Tanot Mata temple. Locals charge the temple to its success of the Indian army. Regarded as the incarnation of the celestial goddess Hinglaj. This temple has a very long association in the wars of 1965 and 1971 when expected to this deity’s boon, maybe perhaps not a good lone bomb burst in its own locale. BSF assembled a massive temple at the location and demonstrated that the unexploded bombs in the temple memorial.

Tanot Mata temple also includes a column of success or Vijay Stambh that was popularized by BSF to indicate the Longewala victory. Annually on December 16, parties take place in the temple to commemorate such an accomplishment that’s only one of the largest in the heritage of India. 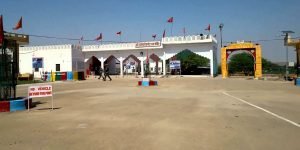 Drive 40 kilometers from Longewala war memorial to achieve Tanot Mata. As an alternative, you may drive 140 km from Jaisalmer into Tanot via Ramgarh road. A check-post in-between Longewala and Tanot request to produce your individuality since it is really a susceptible location. The neighborhood movement is thoroughly vetted and anybody using a dicey/invalid individuality isn’t permitted beyond this

Also read:  Places to visit near statue of unity.

Previous Story
7 things to do in Hampi