Sikh museum in golden temple exhibiting the saga of Sikhism

Established in 1958 at Golden Temple in Amritsar, the Central Sikh Museum highlights the paintings of renowned Sikh personalities who have immensely contributed to the enhancement of Sikhism. Additionally, a rich collection of coins, arms, and ancient manuscripts are also displayed in the museum.

It is open on all days with no entry fees. Visitors can click photographs with special permission from the concerned authorities. It is commonly said that visit to the Holy Golden Temple also known as Harmandir Sahib, meaning ‘abode of God’ is incomplete if one doesn’t visit the Central Sikh Museum in golden temple . As per the varying Sikh history, the museum is divided into different segments. The rare works of the great Sikh artists can be found by the visitors like S. Kirpal Singh, Thakur Singh, and many more. Here is the virtual view of the Sikh museum in golden temple.

The Sikh Museum in Golden Temple also showcases the tyranny faced by Sikhs due to Mughals, the British, and Indira Gandhi inside the main entrance clock tower of the Golden Temple Complex. An excellent library is also constructed in the Central Sikh Museum where authentic documents of religious and historical importance can be found. Handwritten ancient holy books and the portraits of Sikh scholars, religious, social, and political personalities are preserved inside the museum.

The rare pencil sketches, paintings by well-known Sikh artists, musical instruments, rarest stringed instruments, and guns of Sikh Raj are displayed at the Sikh Museum in Golden Temple. Above all, the visitors are enthralled after seeing the personal items of Guru Gobind Singh, the tenth Sikh Guru that include the wooden comb (kangha), arrows and bow, iron chakras (circles) that are worn on the turban by the warrior, and an iron jacket made of wires (sanjo). 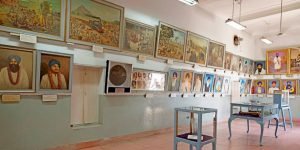 Avtar Singh Parowal, a ‘kirtaniya’ (one who recites hymns) who was killed in Golden Temple during Operation Bluestar in June 1984, also got a place in the museum. The museum is enriched with musical instruments like Saranda associated with noted Gurbani exponents Late Baba Sham Singh, and Bhai Samund Singh who strived to promote Gurmat Sangeet. It also preserves the pencil sketches by Princess Bamba (daughter of the last Sikh ruler Maharaja Duleep Singh), arms used by Sikh warriors, among others.

The lifestyle of Sikh Gurus, Hindu, and Muslim Saints are depicted through portraits in the very first hall. A few photos of some rare artwork and the travels (Udasis) of Guru Nanak is showcased in the second room. The struggle of Sikhs after the period of 1708 is showcased in another room. Portraits of the Sikh Martyrs namely Bhai Mani Singh, Bhai Taru Singh, Bhai Dyala, Bhai Mati Dass are displayed with their struggles and sacrifices.
The Sikh Empire and after independence struggle of Punjab can also be seen along with the Sikh-Nirankari Kand (Clash), Operation Blue Star period, and more. 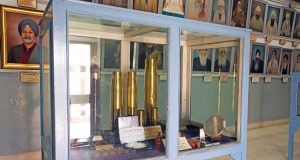 This year, the 550th birth anniversary of Guru Nanak was celebrated, the founder of Sikhism who led the biggest egalitarian revolution in the 15th and 16th centuries against caste and gender inequalities. In India’s capital, Delhi another Sikh museum is located known as Baba Baghel Singh Sikh Heritage Multimedia Museum that was constructed in 2014. It is situated on the premises of Gurudwara Bangla Sahib with an aim to impart knowledge about Sikhism, its principles and ideals to the present and future generations.

The Baba Baghel Singh Sikh Heritage Multimedia Museum offers numerous services, such as audio recordings alongside the artifacts (in three languages—Hindi, Punjabi, and English). It also offers books on Sikh history in various languages, including a few foreign languages like French, Italian and Russian as well as some regional Indian languages like Telugu, Kannada, etc. 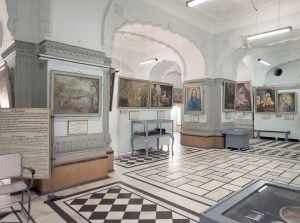 A painting showcasing that the first stone of Sri Harmandir Sahib was laid by Sufi saint Mian Mir holds a great significance. It reflects the idea that irrespective of the community, Sikh Gurus believed to involve everyone who had a spiritual connection with God.
Sikhism originated in the Punjab region during the end of the 15th century. It is one of the youngest among the major religions across the world and as of the early-21st century, it comprises around 25 million Sikhs. Next Story
Travel and Tourism Industry In India