Khajuraho temple is a famous tourist place in Madhya Pradesh 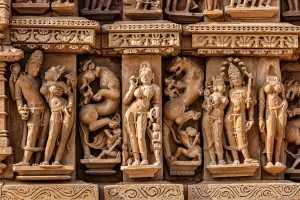 Khajuraho temple is a famous tourist place, that stands gracefully tall in Madhya Pradesh, date back to the 9th century, during the Chandela dynasty but there are different interpretations of the story behind those sculptures, the most popular of which is the one that involved Hemvati.

Hemavati was said to be a bewitchingly beautiful woman. She was taking bath in a pool in Banaras when the moon god got smitten by her. Together, they had a child Chandravarman. But fearing that he may be harassed due to the fact that he has been born out of wedlock, Hemavati cursed the moon god who later prophesied that the child would grow up to become a great king. The prophecy indeed turned out to be true and the child became the founder of the Chandela Dynasty. It is believed that influenced by his mother’s story, Chandravarman built temples with sculptures that depict various forms of human passions. 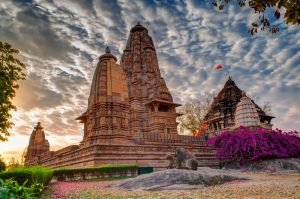 Until the 12th century, Khajuraho had around 85 temples, however, during the 13th century when central India was invaded by Delhi Sultanate, many of the temples were demolished. Today, only 22 temples manage to stand the test of time and have survived till now. Apart from the sculptures, they also signify acceptance and respect for diverse religions and their views because of the fact that they were built together and dedicated to two religions – Hinduism and Jainism. 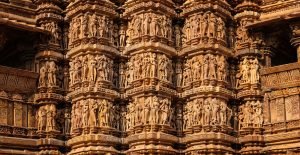 You may have known that Khajuraho temple is a famous tourist place but now that you know about the why’s, why don’t you plan your next trip to Madhya Pradesh and immerse yourself in the beauty of the sculptures that hold great historical significance?

Read this space to learn about places you haven’t discovered yet.