At an alarming level of rains in the Northern part of Kerala, the state is heading towards another megaflood. At least 23 people have died reportedly due to heavy rains in the state.

Water is on an alarming level in the Periyar river and a canal near Kochi airport. Flight services at Cochin Airport have been stopped till 3 pm on Sunday, due to heavy rainfalls. Holiday in schools has been declared, and examinations in the universities have been postponement by the government.

Kerala State Disaster Management Authority (KDSMA) has evacuated more than 20,000 people and have shifted them to 315 relief camps across the state. KDSMA has also issued special advisories in relation to floods in the state. 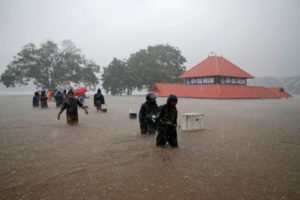 The Central Government has also issued an advisory, which says that “Extremely heavy rains have been witnessed in North Kerala in the districts of Kasargod, Kannur Kozhikode, Palakkad, Trichur, Ernakulam, Idukki, Kottayam, and Pathanamthitta districts. Due to this continuing rainfall, there is a possibility of above-normal to severe floods in the above districts.”

Stay Weather Aware: High waves in the range of 3.2-3.7 meters are forecasted till 23:30 hours of 10-08-2019 along the coast of Kerala from Pozhiyoor to Kasargod. Fishermen are advised not to venture into these areas for the above mentioned period.

Moderate to heavy rainfall with wind speed reaching 40 to 50 kmph is very likely to occur at one or two places in Thiruvananthapuram, Kollam, Pathanamthitta, Alappuzha, Kottayam, Idukki, Ernakulam & Thrissur districts.

Tourism Department banned travel to hill destinations. Train services were hit after landslides and trees fallen on the tracks in several locations Next Story
Planning to visit Hong Kong? Here’s what all you need to know!