India is deemed as the land of Gods and Goddesses. There is no paucity of temples in the country and many are unique in their own ways. Most of them are believed to be miraculous and mysterious. When it comes to the most powerful deity of the Hindu trinity, Lord Shiva is worshipped in numerous forms across the world. His devotees visit his magnificent temples to seek his blessings from different corners of the globe. 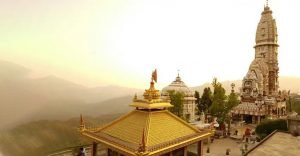 Located at Solan in Himachal Pradesh, Jatoli Shiv Temple is one such temple which is considered to be Asia’s highest Shiva temple. This 111 feet temple is built in the South-Dravidian style and it is a distinctive piece of construction art, which is made on sight.

Now comes the question that why is it mysterious?

“It is deemed mysterious as the sound of damaru is produced when the stones are tapped which is surprising for the visitors. It is believed that during the mythological period, Lord Shiva visited here.”

In the late 1950s, Swami Krishnananda Paramahansa visited this place and after his guidance, the construction work of Jatoli Shiva Temple began. In the year 1974, Paramahansa laid its foundation. However, in 1983 he took samadhi but the construction work didn’t stop and continued under the temple management committee which took nearly 39 years for this temple to be fully prepared.

This holy temple is constructed with the money donated by devotees from across the world and that is why it took over three decades. Statues of several gods and goddesses are installed in this temple. It also has a crystal gem Shivalinga. Apart from this, the idols of Lord Shiva and Mother Parvati are also installed here. At the upper end of the temple, a huge 11 feet high gold urn is installed, which makes it mesmerizing.

If you love heights and want to explore mysterious mythological places, then you must visit this temple. Jai Mahakaal!